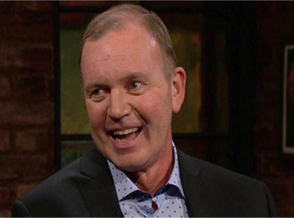 We were blessed to have had Fr Tony as our ‘parish priest’ and friend for 10 years. Ours was his first parish appointment and Tony brought an energy and freshness which was joyous, occasionally chaotic and always liberating. Children and parents alike, making their way to school, will remember the raised hand and cheery ‘Hiya’, as Tony strode up the carpark to the church in the morning. Others will remember the easy response ‘Cool!…let’s do it!’ agreeing to every positive idea or initiative which crossed anyone’s mind in the course of a meeting (always brief!) or a casual chat.

There were many recipients of Tony’s quiet kindnesses – the visit in tough times, the kind word, the funny story, the thoughtful gift, the shared coffee or bottle of wine. He brought joy and good humour with his warm smile and frequent laugh; he prompted reflection with those succinct homilies and he gathered us together in prayer; at Mass, through inspired liturgies, on retreat in Glendalough or the Aran Islands, on pilgrimage to the Holy Land, in novena prayer to St Óscar Romero – whose life and courage inspired him.

Through these myriad of ways he drew us to the Jesus he spoke of and to the values which Jesus Christ shared with us during His life on earth. Pope Francis speaks to us of attracting people to the Joy of the Gospel. Tony epitomised that, indeed it was said of him by one of his doctors that he embodied his faith. Tony’s faith inspired action and outreach – to the Syrian refugees, to the people of Haiti and of course for the IMNDA …and we walked with him, while we could.

Having moved here from his chaplaincy role in UCD, Tony continued to reach out to young people and some, inspired by Tony, hiked to Glendalough, travelled to World Youth Days or volunteered in Haiti. Some say it was one of the best experiences of their lives. We hear tell now of plans for a new Tony Coote wing of a school in Haiti and hope it brings much closeness between our parishes and the people of Haiti. What a legacy that would be for our dear Fr Tony!

Tony’s vision was of an open, healing and welcoming Church. ‘Love, not Judgement’ he had emblazoned on flags flying during the Year of the Mercy. To illustrate our parish family – handprints of all colours and sizes proudly stamped, by any and all who wished to join in, on huge banners subsequently affixed to the external walls of Clonskeagh, Kilmacud and Mount Merrion churches.
If there was a suggestion that the execution of such an paint project might cause a bit of a mess, Tony eyes would light up at the sheer chaos and fun of it! Tony had a great capacity for joy – the handprint project was fun and was a powerful visual representation of inclusion.

Tony’s faith, as he told us later, in his book ‘Live While You Can’, was predicated on the three pillars of Inclusivity, Compassion and Love. His parish initiatives latterly too, reflected those three pillars. Tony reached out, with the PPC, to the LGBT community and hosted them and their families in his home. He wanted to offer a safe space where life stories could be heard. Tony encouraged lay-led liturgy and welcomed new opportunities for women in particular, to gather, to have their voices heard and to lead.

Tony’s faith and hope in the face of his diagnosis and death were inspirational and he attributed that to his faithful family, his dear friends, the kindness of his parishioners and his closeness to Jesus. Writing, the year before he died, Tony said “I have always felt close to Jesus Christ…I cling to him now and know that despite any darkness there will always be a glimmer of light.” Tony spoke powerfully of that glimmer of light….that Hope. He chose a yellow balloon as a symbol of Hope for WWYC …and he was a bearer of that Christian Hope to us, his parishioners, too. We thank God for his life. As we remember him and his family and grieve him on the first anniversary of his death, we remember too his challenge to us;